What can we take from urban legends and their cinematic equivalents when teaching those elements of great stories and narratives?

As a university student in the late 1990s, I was fascinated by what was, in hindsight, an early example of viral marketing, for the 1999 film The Blair Witch Project. The film’s use of found footage alongside the producers’ efforts to purport the events of the film as factual was something that felt completely new. I liked the fictional ‘backstory’ the production team devised as part of the promotion of the film, which they explored through a mock documentary, the distribution of ‘missing persons’ posters and, with uncanny prescience, a website documenting the legend of ‘The Blair Witch’. 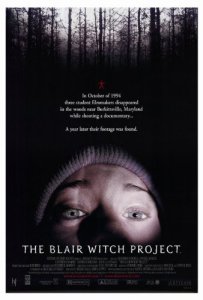 The production team capitalised upon the idea of the ‘urban legend’, a story often rooted in something mythological, folkloric or supernatural, usually apocryphal in origin, and existing in several forms. Inspired by my own fascination with The Blair Witch Project, I wanted to explore how the appeal of the ‘urban legend’ might help students to learn about the compelling elements of narrative, providing them with an imaginary space in which to work and an understanding of genre at ‘text level’ but also in the sentences and words they would choose. As part of our thematic curriculum, Year Nine students explore the role of myths and monsters in story-telling as part of a scheme of learning that encourages them to begin to make connections between stories and society at large.

Students usually arrive at Key Stage Three familiar with the idea of story structure at some level, perhaps having used terms such as ‘opening’, ‘build up’, ‘main event’, ‘reaction’ and ‘ending’. But exploring several ways of opening stories – such as scene-setting, establishing conflict, in media res and developing back-stories which follow with a switch back to the immediate present of the narrative – can help students learn how narrative is ‘framed’. It can also help them to work through other tricky issues around storytelling, such as establishing clear narrative perspective and handling confidently the passage of time. 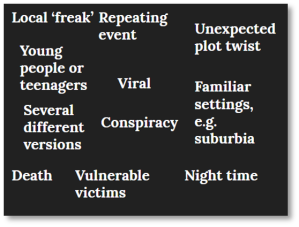 In class, my Year Nine students and I began by exploring the idea of the ‘urban legend’. Students enthusiastically became engrossed in researching these themselves, mixed up with one or two screenings of YouTube’s various takes on ‘top urban legends’. This initial research was then followed up with a whole-class discussion about the various elements that the urban legends had in common. For example, many urban legends exist in multiple versions. They often have a familiar, suburban setting and work as a kind of cautionary tale to the young people who become drawn into the events of the story’s antagonist. This discussion was very much about form and genre. It helped us to establish some of the codes and conventions of the urban legend and its relationship with the horror genre, as this great blog post on digital media website Mashable explores.

One of the elements the students agreed was most important was the setting. As they observed, this is usually something very familiar, suburban even, with an ominous mystery lurking somewhere close at hand. They also noted the importance of the apocryphal ‘back-story’. I asked my class what a town where something really bad had happened many years ago might be called. I first suggested ‘Deadwood’.

‘Too obvious’, they said.

‘It sounds like a bad omen. Something bad is going to happen there.’

‘But these kinds of towns are usually really happy on the surface. It’s not until later we realise bad stuff happens there.’

‘How about River Wood?’

Having voted as a class for River Wood, I used the preview tool at a free fonts website to create some ‘logos’ for River Wood, pitching it to the students as perhaps the name of a new Netflix series in the style of Stranger Things. I asked which typeface would work best. A discussion around deliberation and the intricate effects of the way we construct creative artifacts was really helpful in establishing from the outset with the students the integral importance of the decisions we make in our writing and how genre is constructed.

We then began to imaginatively build  the town of River Wood. I presented a series of images of the ‘town’ as it ‘is today’, then some ‘archive’ images of the town from many years ago. 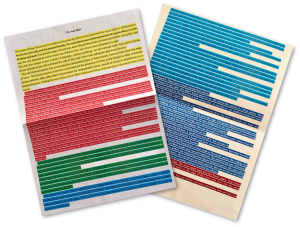 I shared with the class a story I’d written as a sort of ‘here’s one I made earlier’. I’d pre-highlighted the text to guide a discussion around structure for after the reading. I chose to go with a scene-setting opening, followed by a back-story, trigger, building toward a climax, climax then a resolution. The back-story element, I surmised, would allow the students to establish some of the conventions of the urban legend, and provide an opportunity to practise control of their narrative voice and to experiment with how they show passage of time. 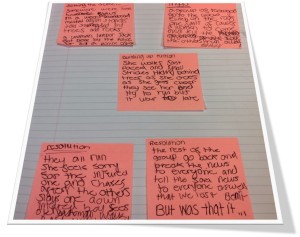 students began mind-mapping and making notes. They used their research to transform an urban legend into a story, or to assimilate elements of various urban legends together. Then using sticky notes, they worked on shaping their material into a sequence.

Having established a narrative structure, we worked with my descriptive story opening and back-story and focused on what worked well and what might be improved. The focus here was ensuring students establish a clear narrative perspective (first-person works best as students are familiar with this mode of writing, although more confident writers might choose third-person limited) and helping them to manage the shifts in time from scene setting to back-story, to immediate present.

Students then wrote their first drafts in their exercise books. Throughout this process, I kept on returning to those features we had established as clearly being essential parts of the urban legend genre – and my attempts to exploit them in my own story, making sure the students were able to apply them to their own work.

Initial feedback was focused around allowing the text to achieve its purpose; to be a truly compelling piece of narrative: 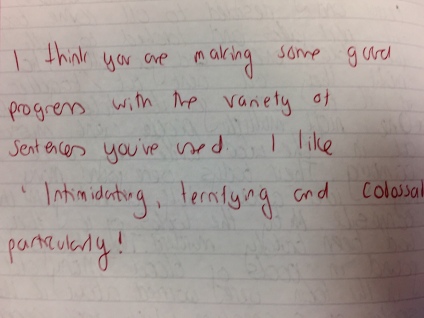 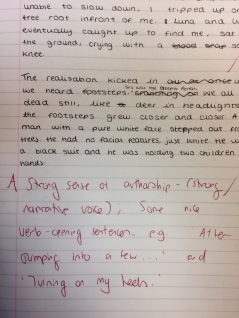 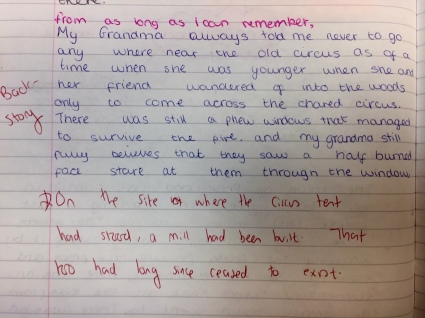 At this point, I decided to pause the drafting and editing and introduce some new teaching. I felt that a more clear focus on the writing at sentence level and word level would be good.I planned a study of an extract from the first chapter of Stephen King’s It. In a strange way, this story has itself many of the features of the ‘urban legend’. Many urban legends are North American in origin; many are based on earlier myths or folk tales. King’s novel evokes a sense of the ‘American Gothic’ through the character of Pennywise the Dancing Clown and the macabre events the novel details, several of which go back generations. The regularity with which Pennywise appears to unleash his destructive tendencies fits well with the ‘repeating event’ which characterises urban legends and the horror genre. Furthermore, the novel itself has inspired countless urban legends about killer clowns in real life. 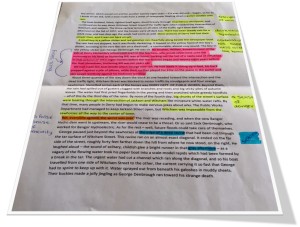 Students annotate an extract from the opening of Stephen King’s It.

The opening sentence of the story alone provides a lot to discuss, and rightly so, as King is a writer who spends a long time crafting his opening gambits:

‘The terror, which would not end for another twenty-eight years – if it ever did end – began, so far as I know or can tell, with a boat made from a sheet of newspaper floating down a gutter swollen with rain.’

I asked the students: why the precision of ‘twenty-eight years’? Why the juxtaposition of something epic with something as mundane as a newspaper boat? Why the personification of the gutter as ‘swollen’? What might this suggest? What is the effect of the various parentheses?

What works so well about the first chapter of It, which I pre-annotated before teaching,  is the in media res opening and the gradual exposition of character and setting throughout the chapter. The setting, we establish, is crucial. One of the most gratifying things about reading Stephen King is the evocation of place and the details he chooses to focus on. This allowed us as a class to establish some aspects of language and style which we felt would not only embellish the writing but actually be an integral part of it in terms of genre.

As students were redrafting the stories in Google Drive, I gave feedback as part of the process. This was sometimes geared toward working through issues of narrative structure, exploiting features of the genre and working out what was going to happen next. This was a difficult process at times. One of the most important things I took from this as a teacher was just how difficult writing can be. But these struggles and challenges and the solutions we seek to overcome them are very much part of building writing resilience and showing the students how writing is a craft as much as an art-form. Sometimes, the feedback was concerned with the mechanics of sentences. Here, I found it useful to talk about the students’ work in equal terms to those which we’d used to talk about Stephen King’s writing. This is a great way of ensuring that grammar is taught implicitly, by which I mean as part of a process of writing, rather than in cold isolation.

Part of Stephen King’s genius, of course, is elevating the horror genre to something more profound. Unlike many urban legends and horror films, which function often crudely as a cautionary tale against moral transgression or subversion, King’s young protagonists clearly occupy the novel’s moral high ground. The true horrors of the novel are the inhabitants of Derry, the fictional Maine town in which the novel is set, and the abuse, neglect and trauma experienced by the young and innocent. Pennywise the Dancing Clown is a proxy for real world fears. I didn’t feel  that this sequence of teaching narrative writing necessarily allowed the students to engage with that particular discourse, as it wasn’t a study of King’s oeuvre per se.  But as well as providing an imaginative resource to learn about – and apply – knowledge of form, genre and narrative craft, the material allowed the students to discuss the collective fears of our society and the different ways that myths and monsters can shape-shift, evolve and assume a familiar guise whilst still connecting us to the traditions of oral narrative and psychodramas of those who have gone before us.

Some of the writing produced by the students in response to this stimulus can be read at www.confictionarium.com.

Blogs and writes about writing, the written word and teaching English. 'Stay[ing] gold.’ View all posts by Anthony Cockerill